I’m not sure if this issue is the same as Flexgate. It could be seen as Flexgate2. Basically affected models are MacBook Pro 2016, 2017, 2018 13 and 15" and the screen displays 5 pink bars and one black or white bar in various orders and this comes and goes depending on how much you open or close the lid of the MacBook. Intact screenshots and successfully connecting external display show that the problem isn’t with the GPU, or display buffer. The screen works just fine at certain angles (after some fiddling) so my laptop is still more or less usable and I am currently writing this post on the device in question. My device is a 13" Mid 2017 MacBook Pro. The fact that the screen works perfectly fine at a certain angle points to one thing and one thing only - the cable.

The issue can be fixed by replacing the entire display assembly or by replacing the cable by totally disassembling the display as seen in this video. https://www.youtube.com/watch?v=bYtDVjYNxig
I can’t verify concretely that this works for this specific issue also however.

Certain users have said they had their MacBooks repaired for free by taking them into an Apple store or an Authorised Reseller in New Zealand under consumer protection.

Others have not had the same success perhaps due to the staff they got, or simply not knowing a free repair was a possibility. I personally called Apple support and they more or less treated the issue as any other problem and although saying they had heard of something like it did not consider it a wide-spread issue. They simply advised to take it in to be looked at. My better judgment tells me the Authorised Service Provider would just go ahead and perform the repair at whatever price a new screen costs so to me the only option is going into an Apple store where there is someone with authority in warranty matters.

Either way I think customers should be able to get these repairs no questions asked. More so problems like these should be ironed out in QA and not end up in the consumers hands at all.

Here are additional videos and forum posts with hundreds of comments with people having the same issue: 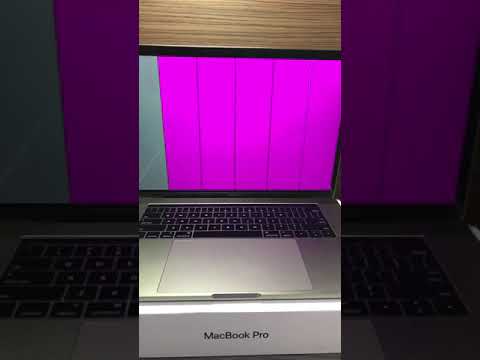 r/mac - Hi my macbook screen suddenly has turned pink / purple anyone know how...

r/macbookrepair - Pink Screen on my MacBook Pro. Everything seems to work fine,...

Just here to say my babied 2016 15" MBP has the same issues and Apple wants $795 to replace. And I get to go a week without my computer (A Vacation?) The Apple employee did mention that he had "seen this before" and said that in the event of a later...

Is this a flexgate issue?

Hey there, A couple weeks back I opened up my laptop and was greeted with a bunch of vertical stripes of horizontal pink/green lines. When connected to a monitor, I have no issues so I think the GPU is fine. The other day though, when I was opening...

This could be caused by the pinching of the cable as the screen changes as the screen is opened more or less, however rather than the screen turning off it appears the signal is being distorted causing the screen to look like it does in the pictures. As the screen isn’t turning off completely this could be due to another defect in the display but I would think it is the cable. Nevertheless it is a widespread issue affecting 2016, 2017 and 2018 MacBooks anywhere from months to years old happening apparently randomly without any external damage occurring.

Apple should add this to their list of known design faults and create a warranty repair program specific to this issue so that users can feel good about getting it repaired hassle free and free of charge.
My best bet is this is a Flexgate 2 where the problem of the flex cable/ribbon being pinched presents itself in a different manner.

Here is a petition:

Update: I took my device into a service provider and he was happy enough to take it for a free repair. The things he was interested in was the date of purchase (less than years since purchase - not Apple care) whether it had received any significant damage or liquid spills and if it had been purchased in Australia. It seems Apple is repairing this issue as long as those things are in check but as of yet hasn’t acknowledged the issue in a formal warranty repair program.

He also put me down for a SSD/SSD firmware change to due some issue affecting these macbooks. Hopefully there are no charges going forward. He said that shouldn’t be and would inform me if there were. Time will tell if Apple acknowledges the issue as widespread.

ATM it seems is Apple is wanting to keep it on the down low and offering free repairs to those who come in (so long as there is no damage and less than three years old) or there haven’t been a significant amount of reports directly to Apple for them to formally acknowledge it. At the end of the day Apple should really be repairing all MacBooks with any design flaws no matter their age or condition. If you have this issue report it directly to Apple and sign the petition and don’t pay for it. If you get on the phone to Apple ask for a senior support staff and they will hopefully get your macbook repaired for free.

Also experiencing this issue with my 2017 Macbook "13 that I have had for less than 2 years. I have a Appointment with apple in a week and will return to update how it goes, what their diagnosis is and if they plan to do it without charge.

I’ve signed the petition because I treat my macs like my babies, they rarely leave my desk, and they haven’t seen any abuse so I am expecting Apple to make up for these faults. I intend to escalate this if Apple doesn’t comp the repairs. How can you expect me to pay to fix something that all other laptops never have issues with, it seems apparent that closing and opening your MacBook may cause this issue and that is a major design flaw if I have ever heard of one.

Update 2: My MacBook Pro with Pink and Black Bars was repaired free of charge by a service provider. It took about 2 weeks. Make sure you still sign the petition as it needs to be officially acknowledged by Apple so that people have confidence about getting this issue repaired free of chrage.

Same issue with my 2018 Macbook Pro 15". 2 weeks after the warranty ends. After speaking about this problem with the store they continue asking me to pay 780€ for a new screen. Ridiculous.

Have the same issue. It happened totally randomly, without a warning.

Repair costs over 800€, though the LCD itself is not broken, but the connection is.

(No luck with Apple Support as-well)

Yes, me too. Happened on Friday. Local store support are quoting me a large sum to replace the display. Apple support say that basically unless there is a repair program they cant do anything, called 3 times and escalated to management. So here we all are either we pay up or wait and hope that a repair program is started for this. In the mean time this is my work machine… what do I do. At least I am not alone. This really sucks!

If it’d be a few hundred bucks — fine, I’ll take it, but dumping almost another 1k into an Intel machine is just plain absurd. In a few years time, those laptops will be worth nothing as the magnificent M processors will make this so (not to mention a working keyboard, etc.)

How did you go about getting the repair for free? Were they more than happy to fix it for free or did you have to heckle them a bit?

As soon as he saw the pink bars he seemed to immediately know it was a free repair under warranty.

He was also very accommodating to all of my requirements (getting some files off it). They didn’t wipe it or anything either but I would want to be absolutely certain anyway for important files. This is not an Apple store but a Apple Authorized service provider in Australia. I think you also talk directly to the people who perform the repairs this route rather than talking to Apple floor or senior staff/genius bar.

Questions he asked however were the purchase date (less than three years old), country of purchase and if it had any physical damage or water damage. He was also fairly lenient over the condition of my laptop as it had been dropped before (was working fine for at least 2 years after that however) but he said it wouldn’t cause this issue as it is caused by problems they were having with the bands on some of these (Macbooks). Which were his words. I opened mine up soon after to upgrade the SSD and I noticed the cable connecting the display was a bit more curved/loose rather than taut (as I had opened it up before the repair to perform the SSD upgrade but opted not to as the display was not working) so it seems this new display has a longer cable.

Also if its of any interest the warranty repair information says a new display assembly is valued at $1089 AUD by Apple but as I have stated the repair cost me $0.

Thanks for the info! I went to an authorized service provider here in Canada today, and they quoted me $850 CAD for a new display. I didn’t know at the time that this is part of the Flexgate defects, so will hopefully go back tomorrow and try to convince them to do it for free.

@DesignerLee,
yo should sign the petition below, we are close to the goal!

Hello everyone! I’m very happy to have found this forum! I got some hope hahah

I encountered the same problem with 2017 Macbook Pro 15’. I took the computer to an authorized Apple service in Lithuania, so they asked me to pay 400 EUR for a new display. Of course I didn’t agree and started looking for information online. If I understand correctly, screens are not replaced for all years of manufacture because this fault has not been officially acknowledged? I signed the petition as well, I asked my loved ones to do the same. Can you advice what to do? Do we have to wait until the petition receives enough votes? Will this really ensure that Apple takes responsibility and replaces all screens? Is it better for me to try to write a letter to an international Apple representative (because we don’t have like an original Apple store in Lithuania, we only have legal representative https://www.ideal.lt/ )? I’m asking for your help, because as I understand after reading all this forum, you are from a larger countries, so I think the situation with an international product guarantee is different.

I appreciate your quick response.

Hello vikushkinas,
I’m glad you have signed the petition, this does not mean that Apple will do it but is better to have an option like Change.org which helps to be heard by the responsible ones and push them to take action under the law.
Only about 1700 signs more to become victorious and start claiming to Apple to fix this huge problem.
Lets keep sharing the petition to reach the goal!